The Hall of Fame

The hardest working jugglers in show business.:
In juggling, as in other artforms, some names rise above all others. Cinquevalli, Rastelli, and Brunn are three jugglers who were legendary in their own time. These three were genuine world stars, with fame extending well beyond the juggling world. Their common feature? They were all tremendously hard workers.
Miss one day of practice, I notice; miss two, the critics notice; miss three, the audience notices.” – Enrico Rastelli

Paul Cinquevalli was the first star of the juggling world. He was a smart, smooth talking performer who used the media to build his reputation. His repertoire was broad, mixing strongman- and gentleman juggling styles.
Among the tricks that made him famous were catching a 25 kilogram cannon ball on his neck, dropped from 3 meter high; balancing billiard balls on top of one another – on top of a billiard cue on a plate held in his mouth; and the “human billiard table” act, where he rolled balls between pockets stitched on his costume.
Cinquevalli died in 1918, at the end of the First World War. He died alone – abandoned by his friends because of his Prussian heritage. He was a genuine world star, with a career that took him from New Zealand to the United States. His death made the first page of many newspapers around the world.
Cinquevalli started his career as a trapeze artist. He fell twice – the second time, landing on a woman in the audience and killing her. After that experience, he decided to pursue juggling instead. 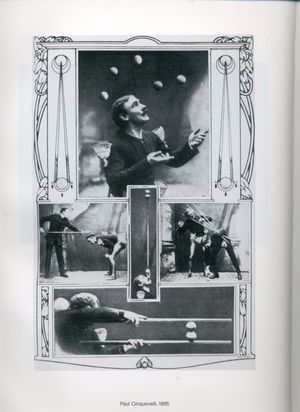 Paul Cinquevalli
Source : Juggling the Art and its Artists, p60

Enrico Rastelli has the honor of holding the title of all time greatest juggler. In his day, he was a legend – renowned by artists of every discipline. He was totally dedicated to his art, practicing every day from 9 until 5 without taking a single break. The audience loved his charisma and enthusiasm. He revolutionized juggling with many innovations, in particular the use of large balls and sticks – tricks he took from Japanese jugglers. He also performed longer shows than other jugglers at the time.
His premature death – due to an infection that was complicated by his hemophilia, was a shock to the entertainment world. German radio even interrupted their broadcast. It was a tragic loss of an artist, struck down at the peak of his career. Thousands gathered for his burial at a mausoleum in Bergamo, Italy. A few years later, a juggling contest was established in his honor, with the world’s greatest competing for the Rastelli Trophy. 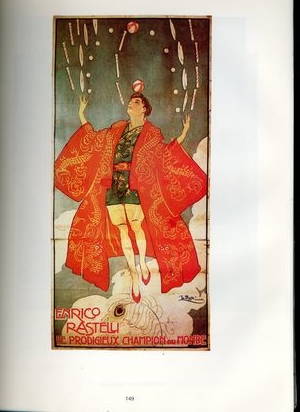 Enrico Rastelli
Source : Juggling the Art and its Artists, p149 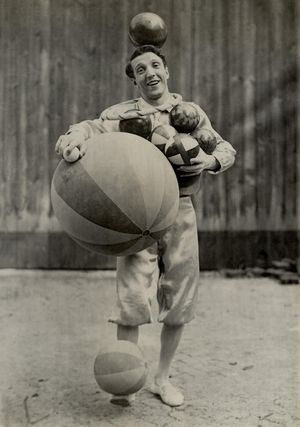 Francis Brunn was the star juggler from the 1950s to the 1990s. His style combined the grace of a flamenco dancer with tremendous juggling speed. He was said to be as good a technician as Rastelli – only ten times faster. In 1948, Francis joined Ringling Brothers & Barnum and Bailey Circus, becoming the first juggler to perform a solo act in the center ring. Brunn could juggle ten rings, but preferred to perform a more streamlined act without that skill - in fact, he was well regarded for his skills using just one ball. For him, an act wasn’t a simple succession of tricks – he saw his routines as one piece – a movement across a stage like ballet. Brunn’s intensity on stage brought to the most famous stages of the world – from Las Vegas to Paris. He was acclaimed in show business for his contagious enthusiasm and immeasurable talent. 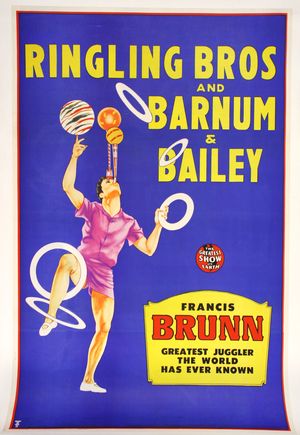 Even in his retirement, the world’s best living juggler is Anthony Gatto. He is the only juggler who ever won the prestigious “Golden Clown” award at the Monte Carlo circus festival. 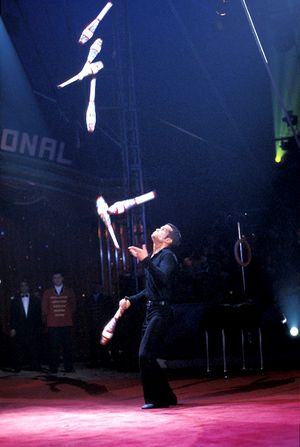